Galerie, a department store in Osaka, marked its January sales by hanging huge red signs emblazoned with the term ‘FUCKIN’ SALE’ in their windows and throughout the store. 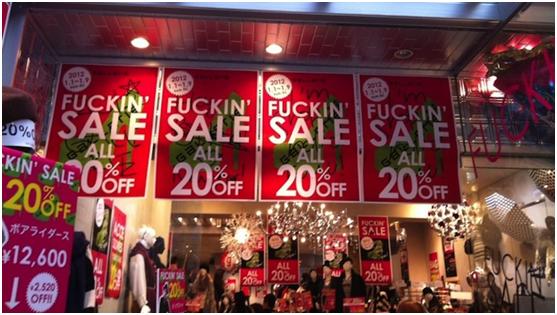 Images of the store’s chosen catchphrase rapidly flooded social media websites and blogs. Once Galerie’s horrified managers caught wind of the uproar caused by the signs, they hastily tore them down. The store also released a public statement apologizing for any offence the slogan may have caused.

It was revealed that the headline had been crafted as a pun on the Japanese term ‘fukubukuro’, meaning ‘lucky bags’. This relates to the Japanese New Year retail custom where unwanted stock from the previous year is discounted and sold in big grab bags.

However, the attempted pun was lost on English speaking visitors and while a lot of the speculation online discusses the hilarity of the signs, the store also received many complaints.

This is not the first time that the term ‘fuck’ has been used for marketing purposes. In 1997, British clothing retailer French Connection began branding their clothes with the slogan ‘fcuk’. Though it was officially an acronym for French Connection United Kingdom, its similarity to the word ‘fuck’ caused much controversy. French Connection fully exploited this and produced a popular range of t-shirts with messages including ‘fcuk this’, ‘hot as fcuk’, ‘fcuk me’ and ‘fcuk her’.

In 2009, the European Union’s trademarks agency disallowed a German brewery to market a beer called ‘Fucking Hell’ until the brewery sued, claiming that the beer was actually named after the Austrian village Fucking, and the German term for light beer, ‘hell’.

In this case, it is clear that the profane caption represents a take on a Japanese pun that was lost in translation and a misunderstanding of the term ‘fuck’ due to a language barrier, rather than an attempt to draw attention to the store. Nonetheless, this controversial slogan has certainly put this Japanese department store on the map.