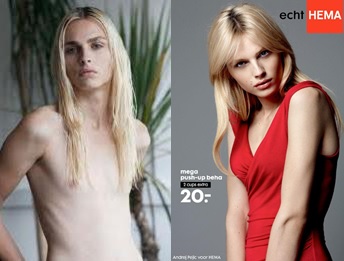 Social media networks were set ablaze recently with the release of an advertising campaign for HEMA, a chain of Dutch department stores. The campaign for the store’s new ‘Mega Push-Up Bra’ is fronted by androgynous male model, Andrej Pejic.

The innovative marketing department at the Dutch retail chain decided to hire the flat chested 20 year-old male to prove their claim that their ‘Mega Push-Up Bra’ could truly “boost your bust by two sizes”. The advertisers named the model in small writing at the bottom of the images, leaving the publicity and news stories to whip up a storm surrounding the campaign.

This pioneering approach to lingerie advertising trended on Twitter hours after the images were released; the campaign has caused mixed reactions.

Pejic’s agent was very positive about the campaign, stating, “It’s revolutionary. I’ve never known a man to do a women’s lingerie campaign before”.

Andrej Pejic has caused a stir in the fashion world over the past year, modelling both women and men’s clothing, most notably closing Jean Paul Gaultier’s haute couture bridal show earlier this year.

Pejic’s feminine features caused Barnes & Noble and Borders book stores to consider banning the magazine ‘Dossier Journal’ because he appeared shirtless on the cover. The book stores said that he might be mistaken for a woman and as a result, sold the magazines in a brown wrapper.

This liberal approach to advertising was seen in other recent news as A Thai airline hired transsexuals to set itself apart from competitors. Both HEMA and A Thai have crossed the boundaries of gender roles. Transgenders and transsexuals have greater visibility in Thailand than in many other nations and in the Netherlands there is widespead support, tolerance and equal rights for LGBT people.