Textappeal | NEW YEAR COUNTDOWN (Day -10, Auchan. One can of corn with a caterpillar, please.)
2340
post-template-default,single,single-post,postid-2340,single-format-standard,ajax_fade,page_not_loaded,,qode-theme-ver-3.1,wpb-js-composer js-comp-ver-4.11.1,vc_responsive

NEW YEAR COUNTDOWN (Day -10, Auchan. One can of corn with a caterpillar, please.)

Crisis-management example at Auchan: bad product feedback on social media and turning an unhappy consumer into a brand advocate.

In September 2013, a couple of French people from the North of France discovered a dead caterpillar inside a can of corn they’d bought in an Auchan supermarket.

They made a video which went viral at the time.

They posted it on the Facebook page of the Auchan store they had bought it in (Auchan Faches Thumesnil) to alert them. 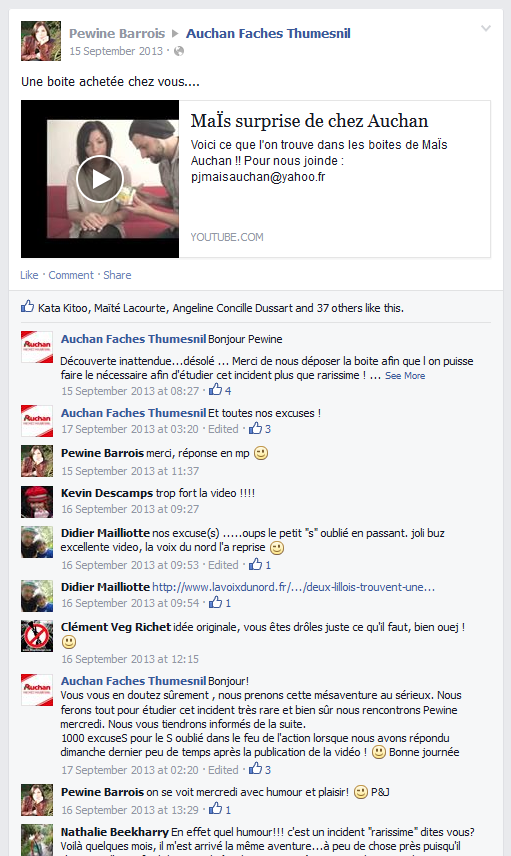 Within the same day Auchan responded:

“An unexpected discovery… sorry… Please send us the can so we can investigate this extremely rare incident! Your funny video is a success… come and see us, although it gave us some ideas – it did not make us hungry for corn! See you soon and [next post] apologies!

After this Auchan and the couple communicated directly, both via private messages and in the comments of the Facebook page to find an amiable solution.

A few months later (February 2014), the man who had found the dead caterpillar in the can – and who’s actually a singer – did a surprise mini concert (“flash-choir”) inside the Auchan supermarket.

This effectively turned a disgruntled consumer into an advocate for the brand on social media.