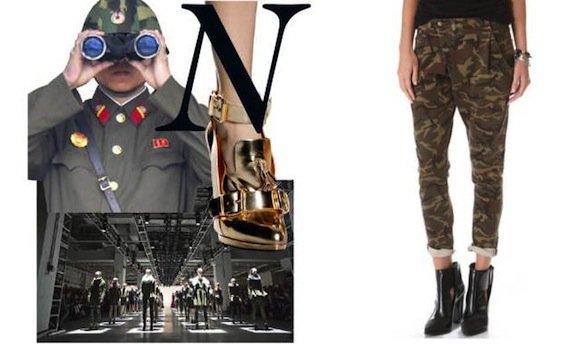 In mid-2012, a North Korean army minister named Kim Chol was reportedly ‘obliterated’ with a mortar round, on the orders of leader Kim Jong-un, for ‘disrespectful behaviour’.

The news was only one rivulet in a stream of concerned rumour winding out of the isolationist Communist state, where reports of disappearances, poverty, summary executions and starvation form a complimentary backdrop to the Kim dynasty’s cult of personality.

For the outside world, most of these atrocities are symbolised by an overwhelming wave of moss-green nylon, gold medals and red stars, the uniform of the North Korea People’s Army and the epitome of the iron fastness that the country’s rulers lock around their own subjects.

However, Elle Magazine has seen something of worth in the iconic attire, featuring it in a recent online piece as ‘North Korea Chic’. The magazine informed its readers that “some iteration of the military trend stomps the runways every few seasons. This time, it’s edgier, even dangerous, with sharp buckles and clasps and take-no-prisoners tailoring.”  The piece included the image of a single gold stiletto poised next to a North Korean soldier at attention.

The piece has prompted outcry from journalists and human-rights groups, who believe that the pieces trivialise the current abuses of the North Korean military complex, as well as having little respect for the people suffering under such a regime. The magazine apologised quickly and replaced the spread with a ‘Naval’ shoot, retaining the majuscule ‘N’, though not before drawing attention to the long, concomitant relationship between the military and the fashion world.

Elle is not incorrect in their point; tropes of military uniform such as gold buttons, braiding, epaulettes and camouflage continually resurface in the industry’s undulating tastes, and the importance of aesthetic impression to commanding respect and power has never been lost on the canniest designers; for instance Valentin Yudashkin designed new kit for the Russian Army only a few years ago.

However, the issue here seems to be the perceived lack of cross-cultural awareness that the magazine is exhibiting, and an absence of empathy for the ordinary people of North Korea, especially in light of recent revelations about the extent of the regime’s crimes, including the imprisonment of children in torture camps, and the execution of twelve high-profile performers for a variety of offences, including the possession of a bible.

More than most types of Advertising in Fashion, have long employed imagery that has been considered insensitive or controversial; Vogue magazine was once criticised for a shoot involving extremely expensive pieces of jewellery and clothing modelled on some of the poorest people in India, prompting accusations that the magazine was treating this demographic as little more than objects.

These publications exist at a fascinating cross-section of art and commerce, one in which a strong aesthetic ideal, perhaps considered very beautiful and thought-provoking, is paired with a strong sense of commercialism and a competitive need to sell seasonal styles.

The immediate withdrawal and apology by Elle showed a willingness to accept that a mistake had been made, and that the crossed line is now clearly marked.