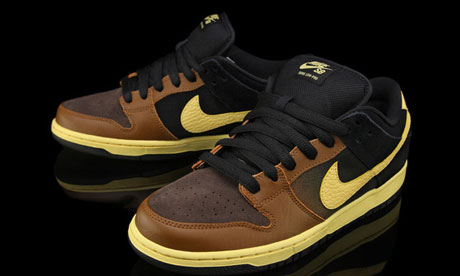 An attempt by Nike to pay homage to the Irish in the run up to St. Patrick’s Day has backfired.

The limited edition shoe launched in the US was inspired by a drink composed of stout and pale ale, two typically Irish ingredients. The concoction’s colour fades from dark to light brown, earning it the name the “black and tan”. Although it might seem like an Irish beverage, the drink is not served regularly in bars in Ireland. The name recalls the nickname given to the Royal Irish Constabulary Reserve Force. Active in the 1920s, the “Black and Tans” were notorious for brutality during the independence war.

Nike has apologized if the shoe’s name has caused offense. Nike officials stated that ‘Nike SB Dunk Low’ was the shoe’s official name and that the black and tan label was attributed by other sources.

To illustrate the degree of offense caused, Ciaran Staunton, president of the Irish Lobby for Immigration Reform, drew a modern day parallel. He claimed that the naming of the shoe “would be the American equivalent of calling a sneaker ‘the Al Qaeda.” Staunton seemed perplexed that no one at Nike had realized the connotations of the name. Other commentators on social media have pointed out that Nike only needed to search the term “black and tan” on the internet to discover its unsavory connotations.

Despite the negative publicity, it seems unlikely this misstep will damage the Nike brand in the long term due to its openness and quick corrective action.